New update of WhatsApp for Android in beta version, confirming that the final stable version of the application in Google Play is version 2.12.304. This is version 2.12.309, an update that has been removed within a few hours of the official site, but in which we have found some very interesting developments, and is now to share links you can see a preview of them, as you can see in the screenshots. Furthermore, it appears that some translations have also been added and fixed some bugs which prevent correct operation of the application on some devices.

Internally this missing update of WhatsApp for Android increases its APK in 131 KB, with 5 deleted files, the “abc_text_cursor_mtrl_alpha.9.png” icon in 4 directories and “abc_simple_dropdown.xml” file, and 12 added files, among them “web_page_preview.xml”, “link_preview-background.xml” (both are responsible to see previews of shared links) and icon “msg_status_failed.png”, a red circle with a question mark inside when failure messaging and gives us the ability to forward it. In addition. Also 456 files have been modified, bestiality, nearly 20% of all application files, where we find all the functions related files. 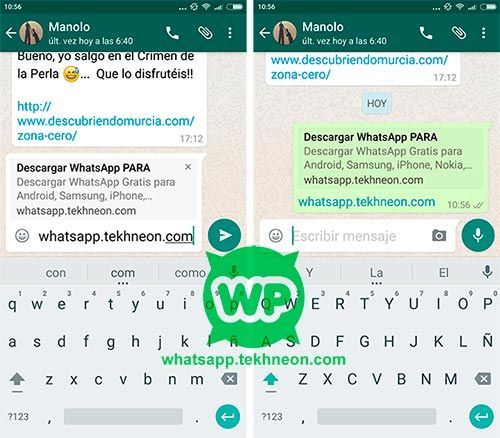 WhatsApp for Android in its Public Beta version is available for free from the official website of the app, but this update does not, although you can download from here.